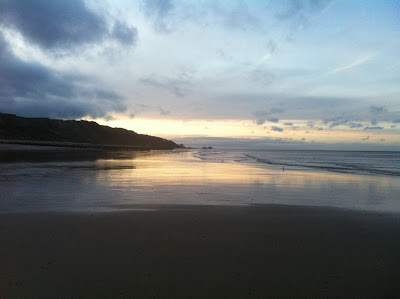 It's been six months since we set off on tour. A voyage of discovery has led us to a small town in , via dozens of convivial conurbations, full, as far as we can tell, of good food, good beer and good people. The overall experience has been one of learning that there are many, many great places to live in this country outside of . But more of that some other time.

The road hasn’t ended yet. There is no standing still. Since we all agreed on where our home and shop will be, however, we've struggled a little to know where to go and what to do. Hopefully it'll only be about a month of living footloose and fancy free, as it's cold and wet outside, loads of places are now closed for the winter (a lot more than there were back in November) and we've just about had enough of living in a van. Until summertime at least.

So we’ve been revisiting some friends in The South and going back over some old ground from the early days of the tour. It’s been an interesting experience, staying in the same spot in Walberswick as we did on that first tumultuous night, but with none of the nerves about what we were doing and whether we were allowed to do it anyway. Or walking back along Southwold pier, in bright sunshine once again, but with ninety percent of the rest of the population having been wiped out, perhaps by climate change.

We found a great little campsite on a farm in , which I would have avoided if I’d known how strong the coming winds would be. On the way I’d stocked up in Beautiful Beers, a great shop in Bury St Edmunds. I heartily recommend the place to anybody who is after a decent beer in a town that would have oodles of it, if it were not the home of Greene King. The shop’s particularly strong in the Tempest department, and after several bottles of Marmalade On Rye (among others) I had completely forgotten that there had been any mention of squalliness. In fact I was fast asleep.

I awoke to an almighty crashing noise, one of those that you can only establish has just happened because bits of it are still going on, even now you’ve had time to collect yourself. And by you, now, I mean me, then. The wind was howling around the van, which bounces around happily when a larger vehicle drives past, so in a gale she becomes a zero-gravity simulation. I assumed the noise had been caused by the removal of a substantial part of the vehicle, but was still too drunk and tired to establish exactly what, so I went back to sleep.

In the morning, the sun shone and total peace reigned on the farm. Alone on the January campsite, the family in the van laid in until ten. I drank some water and felt quite super. Fried some sausages, read to the kids, took my time about thinking where we were going to go next. Not for a fraction of a moment did it cross my mind that there had been a storm last night. Until we set off, that is. The farm stood in a large clearing, but proper foresty forest was only about a hundred yards to the rear of our van, and as soon as the farm track entered the trees, we had to stop because one of the larger ones was lying sideways, completely blocking the way.

In falling, it had brought down the electricity line with it. This, we saw as we backed up, had pulled two telegraph poles askew to crazy angles, and now lay along the line of the track like a menacing cyborg snake. One of the farm workers welcomed us back from our micro-excursion with what was frankly unbelievable good cheer, considering he now had his work cut out for the foreseeable future. He showed us that the powerline had nearly ripped the chimney off the roof of the cottage and had started a fire in the surrounding trees, told us he’d been at it since six taking the farm’s one generator around the various sheds and animal feeders, and gave immeasurable care and loving attention to a pewter-coloured dog in his arms as he described the route of a smaller farm track that “ye moight be ayble to ge’ back ow’ ahrn.”

Moight, here, was the operative word, and he didn’t look the tiniest bit surprised to see me walking back down the muddy path less than ten minutes later. He had warned me about the big dip, of course, but I’d been so delighted to sail straight through that and back up again, I’d decided to celebrate with a change of gear and suddenly found a world of no traction. At all. None. Again and again my front wheels would spin, but there was no hint of travel. To look at them from the side was a mystery indeed, as they had not dug into the turf at all – it didn’t even look muddy here. It was just as if I had stripped my tyres naked and slathered them in goose fat. Admittedly I’d been pretty drunk the night before and had forgotten quite a lot, of course.

Still, he didn’t even wait to hear my cries for help, just jumped behind the wheel of the nearest tractor, drove up to me and hoisted me into the cab, then rolled on half a mile to Vanny and set about her liberation. It was, in the truest sense of the phrase, all in a day’s work for him. But if a tree falls in the forest and the only person nearby is too pissed to hear it, or remember that he has heard it, should he really get away so easily, leaving such devastation in his wake?

A few days later we were back in Overstrand, on the coast, looking out to sea. “Do you know,” I asked E, who automatically rolled his eyes, “if we were to sail away, out there, Due North, where we would arrive first?”

“Good try.” That’s what I would have guessed too. Luckily I had already looked at a map. “We wouldn't actually meet land between here and The Arctic.”

“Oh. Wow.” There aren't any words for how un-wow his wow sounded.

“I like this idea of being back in the very same spot we were in six months ago, when we are actually as far from where we were as we will ever be. In, like, astronomy terms and that. About 180 million miles across space, we were, in fact, in the very same place.”

“Yeah, but the galaxies themselves are moving too. A lot further and much faster. The universe is always expanding.” He pointed to a muddy spot about thirty feet away. “Plus, last time, we were parked over there.”
Posted by bluesnightorg at 02:44 No comments: 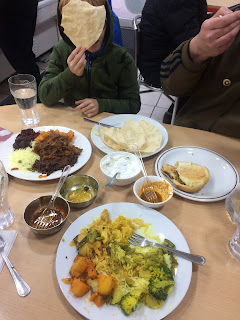